Recap: my Fashion’s Night Out in NY 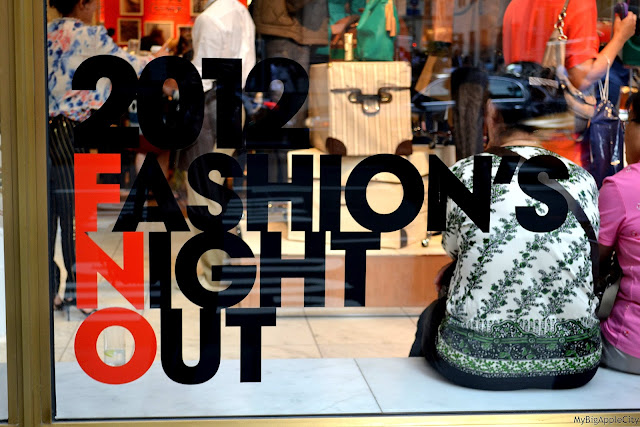 This year again, Fashion’s Night Out in the City was an amazing experience. It is always quite a singular atmosphere: people dress up, designers open their doors, celebrities come… As you could see on my post yesterday, the list of where the best things were happening was long. Unfortunately, most of them happened between 6 to 9pm, so you had to make a choice.

With two of my besties Emilie and Anaïs, we decided to begin with the Upper East Side and finish with Soho.

Bergdorf Goodman was definitely the place to go first! Starting at 3pm at the beauty level with DJ Johnny Dynell, the elegant department store provided everything you could imagine to prep for the big night! We had the pleasure of enjoying John Barrett Salon with its Braid and Ponytail bar where we all chose a different hairstyle. Thanks to them, my voluminous bun made me look taller. You can’t really do your hair and leave your face make-up free, right? We headed to the Aerin Lauder booth (where Aerin herself made an appearance) and left our faces in the hands of the skilled beauty experts. Aerin Lauder’s skincare & make-up launch is pretty popular (hello? Read any magazine!), and we understood why. The powder, illuminer and blush are gogeous: our skin was GLOWING! I want them all!
We signed up for the Miss Pop nail bar. After sipping bubbles and eating cupcakes, it was time to head to Madison Avenue. 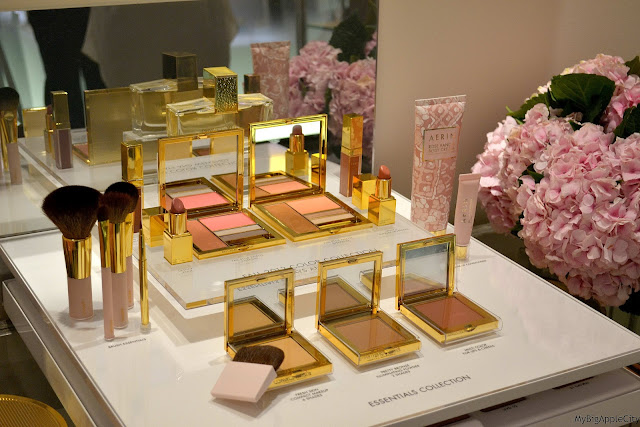 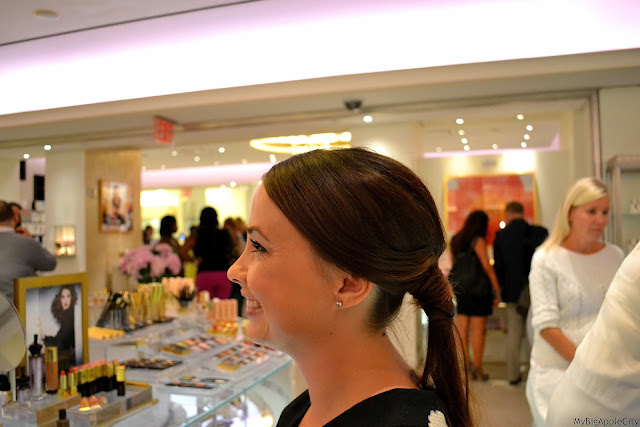 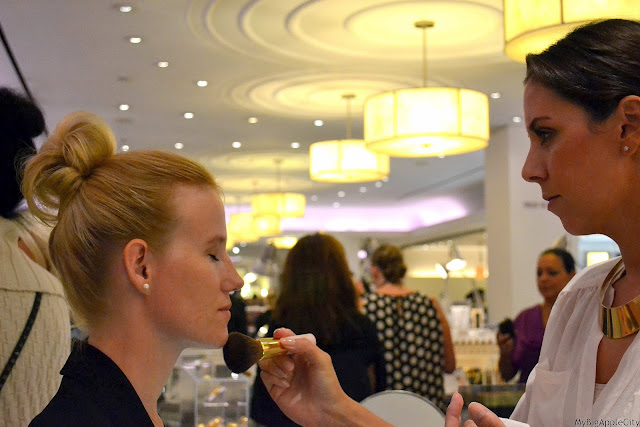 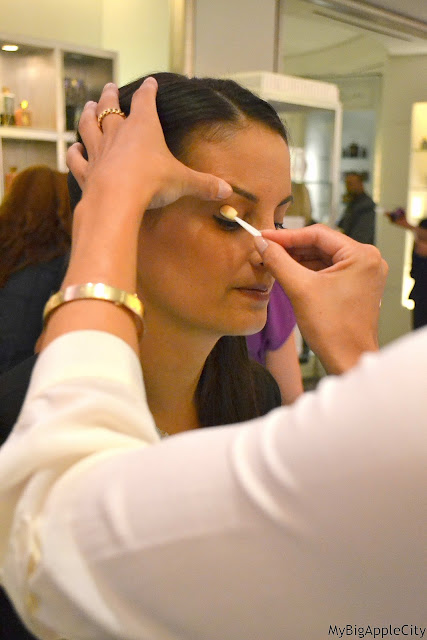 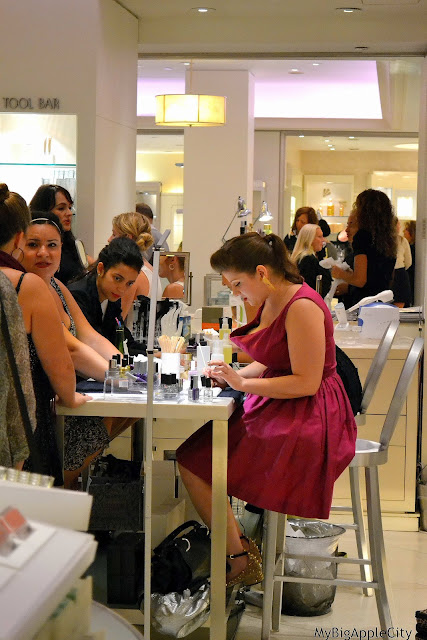 Calvin Klein announced a special guest at 5.30pm. Curious as ever, we were dying (kind of!) to know who it was. Dwayne Wade was already there signing his book on Dwayne Wade Surprising Facts (haha, I’m kidding, I wish) but gosh he was looking good. A vogue crowd and few bloggers were also there (hi Hanneli!). Hmm, we didn’t see any mystery guest at the end… So yes, we actually missed Ryan Lochte. We should have stayed at Bergdorf for our manucure! 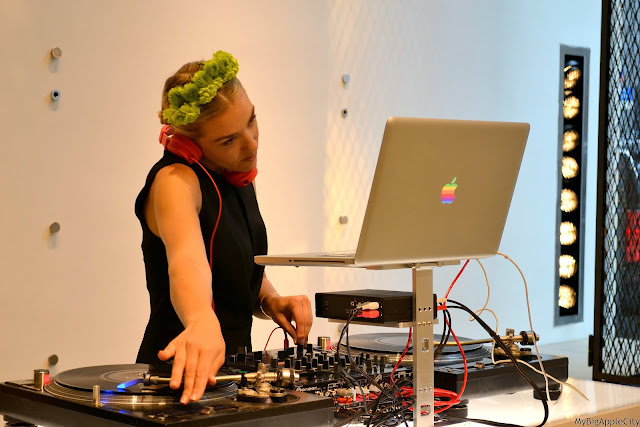 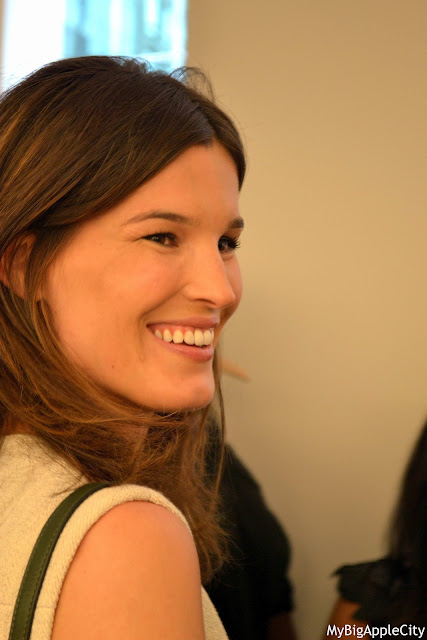 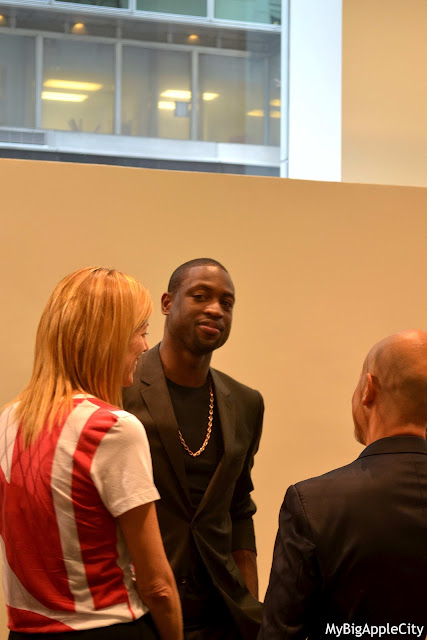 DKNY had a nice conference going on with Miss Piggy, famous photographer Patrick McMullan, NY Firefighters and Donna Karan herself. 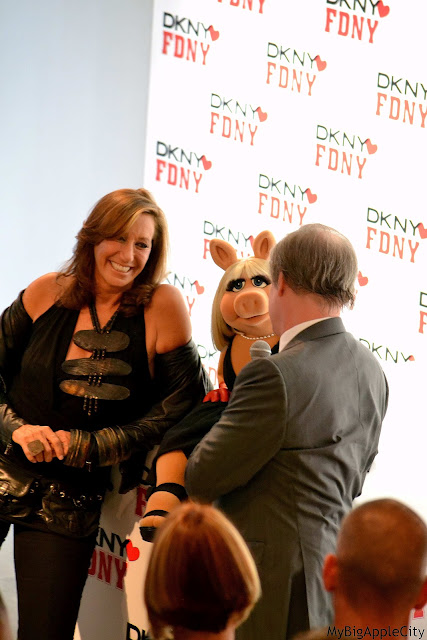 6pm: time to check out Coach. For those who don’t know; I’m a big fan (I think I could almost die!). It was the launch of the Duffle bag with Solange Knowles as a DJ and some nice DIY bloggers. Drinks tasted funny but the atmosphere was relaxed and happy. 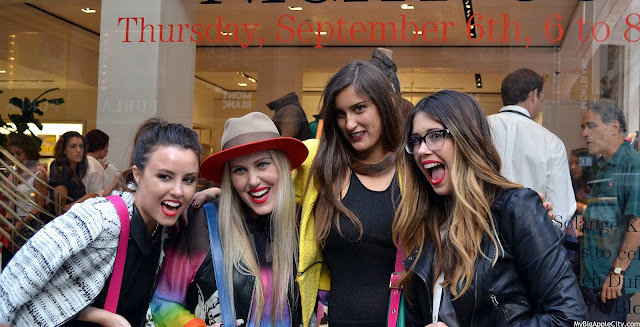 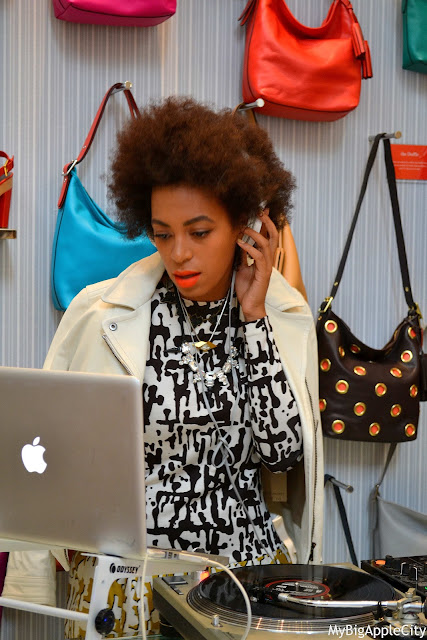 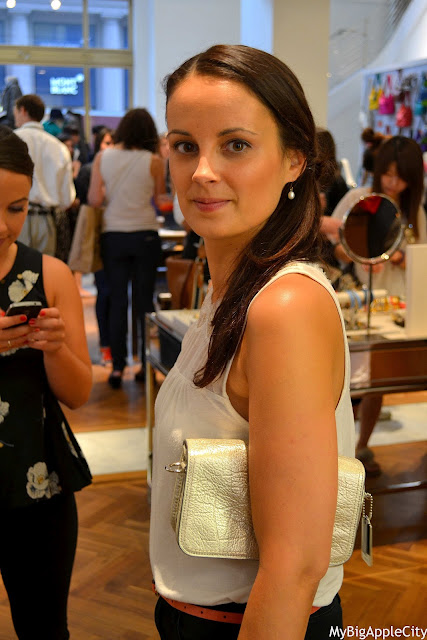 Checking out Mulberry, we were delighted to talk with a friendly sales associate about their winter collection. Sipping lemonade, we entered a game with an hourly winner. Nope, none of us won anything. 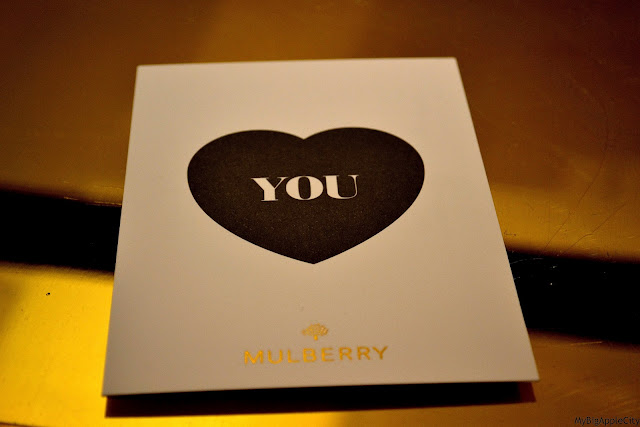 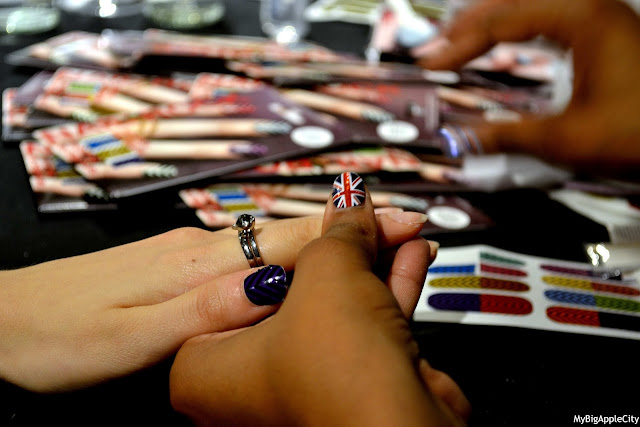 Next we headed to Chanel for their Twin Set launch (matching nail polish and lipstick). Well, nothing was happening there. Sales associates were obnoxious and unfriendly as ever. With that attitude, don’t even bother opening during FNO.

We discovered a new italian brand named Dodo. The boutique was adorable and friendly associates were giving away colored bracelets. 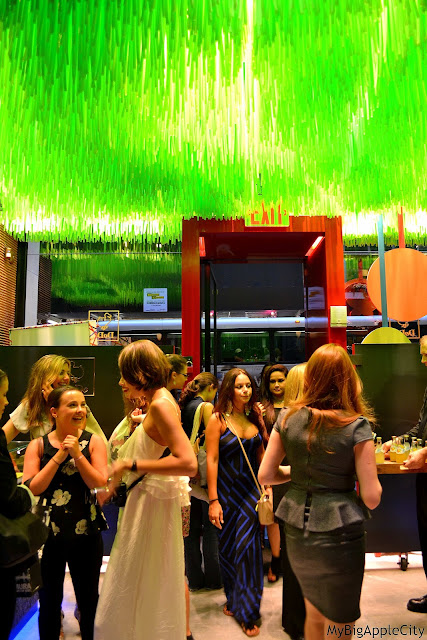 Michael Kors was crowded with its karaoke set and Michael Kors himself. It was impossible to enter with a long queue all around the block. Sorry Michael, no time to wait. The hostesses were friendly enough to give us some fragrance samples, though.

We arrived at Bloomingdales kind of after the party even if it was only 7.30pm. Actor Kellan Lutz was hiding somewhere in a bed on the seventh floor, though noticing the 300 girls awaiting, they definitely found him. Kelly Rutherford had left by that point, but things were still moving on the beauty floor with a nice vibe at the Clinique booth. Eva Chen, the beauty expert from Teen Vogue, told us about her essentials, and an instant photo booth gave all of us a fabulous group picture. 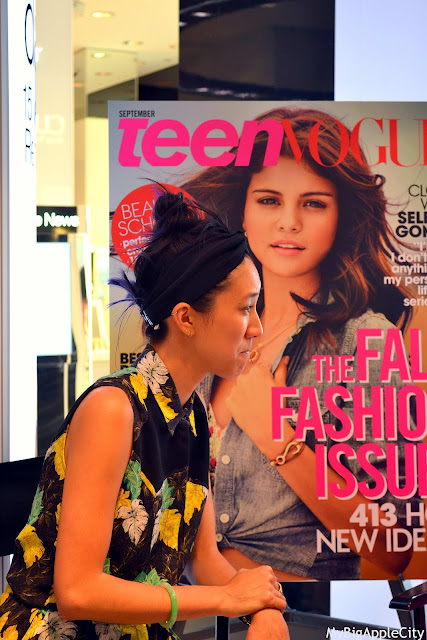 It was 8pm when we decided to try SoHo. It was madness. My advice: do not go on Broadway if you want to live!

We went to C Wonder, spotted some balloons on the street and ran (at least a mile) all around SoHo to catch the guy. It was ridiculous but made for a good laugh. Back at the store, they gave us a pair of earrings and a gift card in exchange for our ballons. If this has given you the inspiration to head out to your local department store for somewhat of a spending spree, don’t forget to use this resource where you can find discounts and coupons for places like Macy’s so that you can save while you shop and stay within your budget more easily. 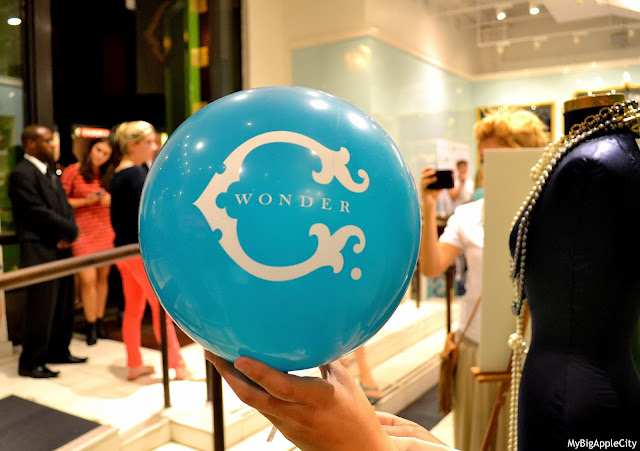 After all these drinks, walks and the run, we were starving. Saturday’s Surf was said to have a BBQ so we decided to check it out. Unfortunately it was just a myth and we were not the only ones asking about it. Where did that rumor come from anyway?

Being so close to Chinatown, we said our goodbyes to Fashion’s Night Out and enjoyed a late asian dinner to finish the night. To sum up: we had a great girlfriend time!

See you next year FNO! Fashion Week officially started and I am off to the Lincoln Center.

Take me back to Cassis 💙🐕 Souvenir from a mo

One of my favorite places in France: la plage de l

My NYC anniversary! 🥂 Come celebrate with me 11

Morning in SoHo 💘 From one photoshoot to the ne Hi, I'm Jennie and I am the owner of this blog. Have a question? You can reach me at [email protected] Thanks for stopping by. xx